Do you have a place you go to eat where you always order the same dish? Mine is Eat Me Café in Scarborough, and that dish is a ramen noodle bowl: a bottomless pit of homemade broth with pak choi, Chinese leaf and a soy half egg, usually with fried tofu, but occasionally, chicken.

Almost 20 years ago fresh out of studies, I worked as an English teacher in Taiwan and the food was often - interesting. For six months I basically rotated between noodle cafes, Subway and the Teppanyaki bar across the street from my apartment. One noodle place in particular was my salvation when I was feeling homesick, serving up bowls of steaming soup so comforting it was the Asian equivalent of a roast dinner. Over the years I’ve tried to replicate it using ingredients like miso paste and udon noodles, but it’s never been the same. The only place I’ve ever eaten similar is Eat Me, and I order it every time with slavish devotion. 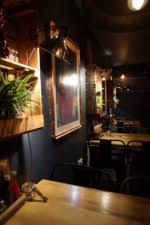 Since it opened several years ago this trendy little Scarborough gem has won numerous awards, including Best Café in the UK (three times). I’m not sure if it was pandemic or popularity that prompted its move from Hanover Street to the Stephen Joseph Theatre across the street, a larger space, this summer. The former was cool and cosy, while the theatre is a stunning slice of Art Deco with a light, airy upstairs restaurant.

Frankly, I could eat my soup outside on the street and still be happy. This is where a lot of the menu originates from, after all; Asian street stalls where the food comes out fast and flavoursome. Alongside staples like Korean fried chicken and donburi rice there is an array of juicy burgers, classics like Mac n Cheese and more exotic specials. My son always plumps for a chicken satay rice bowl, with a side order of fries. We have an ongoing debate as to which establishment does the best chips in Yorkshire. Twice fried and secretly seasoned, these are a strong contender for first place.

The other thing I did when I was missing home in Taiwan was listen to Ella Fitzgerald and Billie Holiday on repeat, so it seemed fitting when Eat Me were playing jazz last time I visited. Seated next to the window looking out at the August rain lashing the railway station took me right back to the tropical storms of the Far East.

Once upon a time Scarborough was all fish and chips and pies. Those things are still lovely, but the addition of Eat Me has upped the town’s food scene considerably. With the theatre happily reopened, its new home is bound to enhance the experience of showgoers as we move into the autumn season.

Music and media stars launch search for song for Yorkshire