How much do we change from the age of 7?

One of my favourite things to do is root through my memory boxes: a wonderful eyesore of multiple shoeboxes that used to be congregated in my bedroom but have recently been demoted to the wardrobe (they’re an addiction- I have 10 memory boxes and I’m only 22, God help me when I’m 50, I’ll have to dedicate a whole room). The boxes are filled with all things weird and wonderful from my time on earth so far: photos, plane tickets, signed school shirts, festival bands, school planners, half mouse-chewed dolls, and old diaries. It was in one of these diaries that I found a few pages from an ‘All about me’ page from my 2005 diary: AKA my diary from when I was 8 years old.

Along with some amusing lines such as ‘Shoe size: 3 big’ and referring to my Sister’s dog as one of my siblings, I was shocked to find that a lot of what I had written 15 years ago could still be applied to my 22 year old self.

It got me thinking, how much do we actually change as we grow up? Sure, we have experiences, go places and meet people that shape our lives as we age, but how much of our personality and dreams remain consistent?

A lot of people reading this may be aware of the ‘Up’ TV documentary series in which ITV followed the lives of 14 British children from the age of 7, meeting back up with them every 7 years to film a new show and see how their lives had changed. The show has been running for 56 years now, making the original 7 year olds 63 in the last instalment in 2019. I first joined in with my family to watch the show at ‘56 Up’ in 2012 and then watched 63 Up last year, but most of my family can remember watching the show from when they themselves were very young, probably from ‘Seven Plus Seven’ in 1970. Many people agree that the participants have relatively remained quite similar to their 7 year old selves.

Numerous studies have found that our personalities remain mostly unchanged. The four main personality traits investigated in a UCR study were verbal fluency, adaptability to new situations, self-humbling behaviour, and impulsiveness; and it was concluded that: ‘We remain recognisably the same person. This speaks to the importance of understanding personality because it does follow us wherever we go across time and contexts’.

So how much have I changed since the age of 7? I can’t remember much about myself at that age, but finding the diary page did shed a little light. 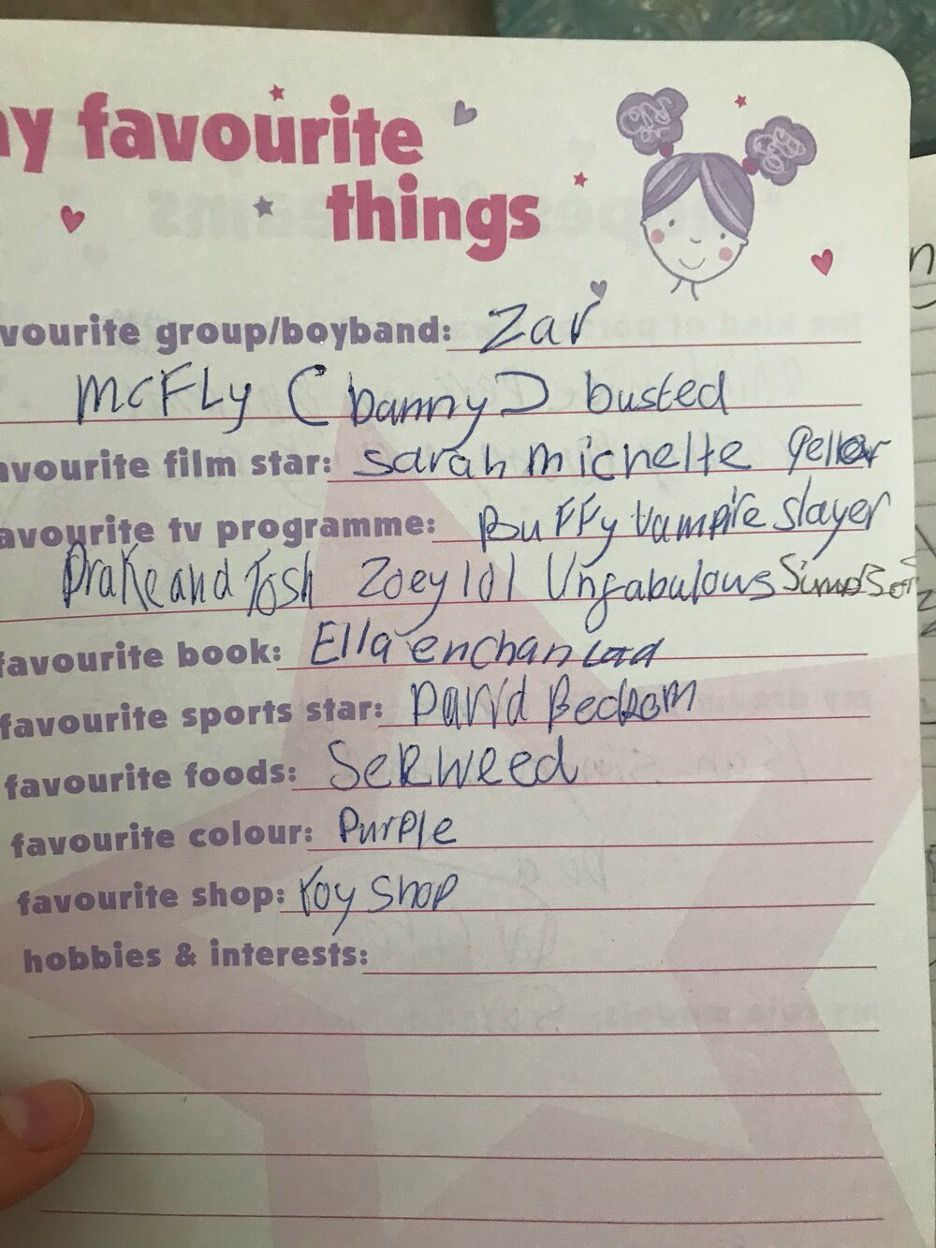 Ok, so the pages don’t really do much to show me how verbally fluent I was, how adaptable I was to new situations, how self-humbling my behaviour was or how impulsive my actions were, but they did help me to understand my dreams and favourite things.

I do still love Mcfly and Busted (I actually went to see ‘McBusted’ when they teamed up for a tour in 2014 which I’m sure 8 year old me would have enjoyed just as much as 16 years old me did). I still have a lot of respect for Sarah Michelle Gellar’s acting career (I am still very much wowed by the Scooby Doo live action remake films). I’m sure I’d still be partial to a bit of Drake and Josh, Zoey 101, Unfabulous and Buffy the Vampire Slayer (not entirely sure how appropriate the last one was for an 8 year old, but perhaps it would explain a few things). For the life of me I cannot remember reading ‘Ella Enchanted’ nor am I sure it is actually a real book and not just a film, I would like to think that I’m slightly more well-read 15 years on. David Beckham can now be appreciated for different reasons and I’m 90% sure that he only won the highly coveted title of ‘my favourite sports star’ because he was the only sports star I knew (not much has changed there). My favourite food is in fact still seaweed or ‘serweed’ as I have written (not from the sea, the kind you find in a Chinese takeaway). Purple is no longer my favourite colour but it does change very often and I’m sure I would still love the Toy Shop if it was societally acceptable for a girl in her early twenties to frequent it. 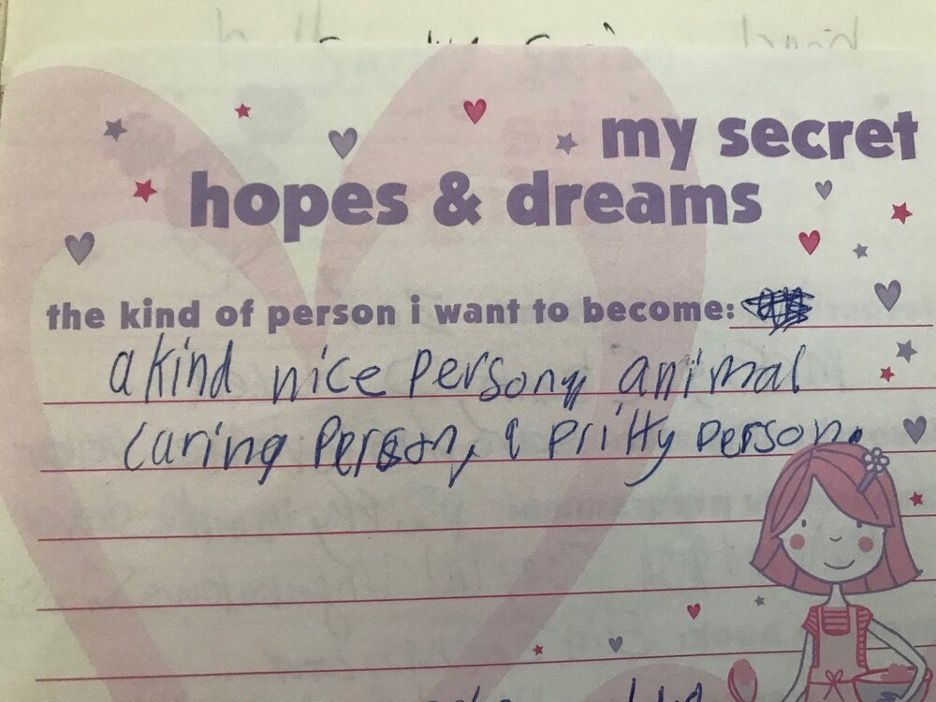 I must admit, I love 2005 Beth’s dream to become ‘a kind nice person, animal caring person, pritty person’ (let’s not judge my spelling) and I’m happy that at least ‘pritty’ came last on the priorities list and ‘kind’ and ‘nice’ came first, I’m proud of 8 year old me for that one. 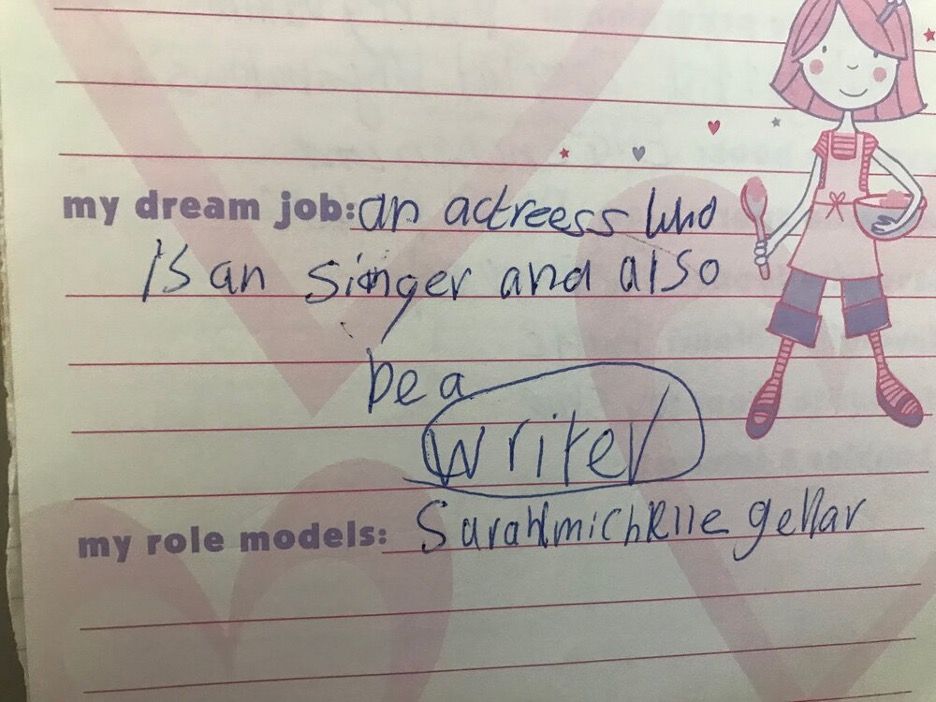 My dream job to be ‘an actress who is a singer’ was probably swayed slightly by my best friend Rosie who was desperate to be on stage (she once dragged me to a drama workshop at the age of 9 so she wouldn’t have to go alone and I hated every minute of it, so that dream died pretty quickly). Although, it did make my heart swell slightly to see the messy scribbling of my younger self say ‘be a writer’ with a big circle around it; we’re getting there little one, I’ll make it happen one day, I promise.

And, as the few pages really seem to be an ode to her, I clearly thought it’s only right that Sarah Michelle Gellar got yet another mention as ‘my role model’ (realistically I think I wanted to be Daphne, not Sarah Michelle but who knows?).

So there you have it. I don’t think I have changed much from the age of 7, perhaps the studies are true. What were you like at 7 years old? Have you changed? Let me know in the comments or over on my Instagram @girlonpause or on my new Facebook page ‘Girl on Pause’ (I’m really covering all the socials now).

You can find more from Girl on Pause at www.girlonpause.com or keep up to date with my attempts to romanticise every-day life on my Instagram: @girlonpause and my new Facebook page ‘Girl on Pause’. 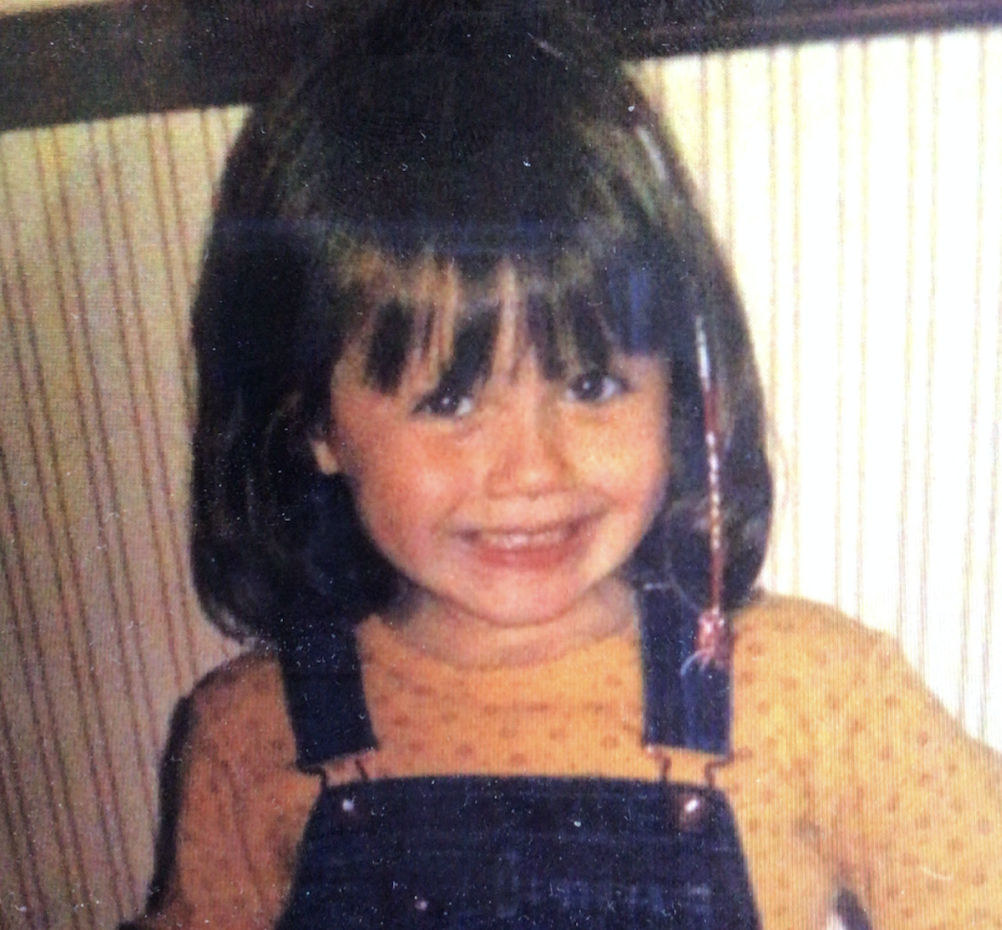 Should other countries follow Spain's lead in offering Menstrual leave?

Working with the body in times of grief