Michelle Rawlins has been a national journalist for 25 years, as well as writing two books and teaching in the Journalism Studies department at the University of Sheffield.

This has proved to be a particularly busy couple of months for Michelle with the launch of her book "Women of Steel" however our team member Mandy managed to catch up with her and learn more about her career path.

I’ve always been fascinated by social history and listening to stories about how the past had impacted individual lives and that of future generations. I guess doing a history degree, followed by a 25 year career as a journalist, specialising in real life features, only increased my already piqued and naturally inquisitive interest.

Whenever I interview someone, I always find myself intrigued in their back stories, what led them up to the moment to the point where I became involved. Afterall, it is past experiences who make up who we are today.

I began my career as a journalist after I completed my NCTJ qualifications in 1996 at the now demolished Stradbroke College, in Sheffield, where I incidentally, also met my husband, Iain.

My first job was at Caters press agency in Birmingham, where I literally cut my teeth as a feature and news writer. It was a tough and fun time in equal measure. It was here I really did learn what it meant to be a journalist writing for national newspapers and women’s magazines. I discovered very quickly, a reporter’s job isn’t 9-5. If a story breaks at 10pm, it’s your job to cover it, no matter what plans you have or how tired you may be.

I remember being called out to a horrific and fatal house fire on my first Christmas Day as a journalist and covering the Tracie Andrews case – the woman from Worcestershire, who brutally murdered her partner, Lee Harvey. You have to cut off from the emotions of the story, as best you can, to do your job. It doesn’t mean you don’t feel upset or the stories don’t touch you, it’s more about staying professional when carrying out your role as a journalist.

Don’t get me wrong, I’m not made of steel and many interviews have reduced me to tears, no matter how hard I’ve tried to stay composed. When I’ve interviewed women, who have lost their children, or overcome a thought to be life threatening illness, you would have to made of stone not to be affected.

Many of the women I have interviewed over the years, have become friends. It’s hard to avoid, in some circumstances, not to let the boundaries merge. One lady, Joan Lawrence, the mum of missing chef, Claudia Lawrence, who disappeared without trace in March 2009, who I have worked with for nearly a decade, is far more now that just somebody I help within the media. I’ve seen Joan experience the hardest of times and suffer the cruellest of pain, and we have become incredibly close. We talk on the phone most weeks and meet for coffee whenever we can.

Another incredible Yorkshire woman I work very closely with is Claire Throssell, who I got to know after her two precious sons, Jack and Paul, were cruelly murdered by their father, in a bitter act of revenge and jealously, in October 2014, when he set the family home on fire, killing himself and their children. We live in neighbouring villages and the whole community, and country was left shocked to the core after their needless and tragic deaths. After helping Claire launch an appeal to have her house rebuilt, we went on to be great friends.

It was another Sheffield woman, Gloria Stewart, that helped me launch my career as an author. Gloria, aka Mrs Christmas, hosts a festive lunch for the lonely and vulnerable of Sheffield every Christmas. After covering her story for Take A Break magazine, I pitched her story to Penguin books and was commissioned to ghost write Gloria’s autobiography, A Friend For Christmas, a fascinating and poignant story of poverty, adversity and love.

Writing Gloria’s book gave me the confidence to pitch my current book, Women Of Steel, which was published this month with Headline. Living in Sheffield, for the majority of my adult life, I was obviously intrigued by the stories that emerged after an article about Kathleen Roberts first appeared in the Sheffield Star, about her time in the city’s steel factories during World War Two. For seventy years, her story, alongside hundreds of others had gone unheard, despite the remarkable sacrifices they had made ‘to do their bit’. 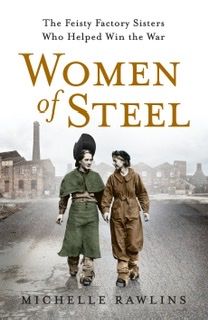 Kathleen, along with many other young Yorkshire women, had responded to the call when the steelworks that lined the River Don were left short staffed after their heavily male dominated workforce left in their droves to fight for King and country.

The factories were needed more than ever to manufacture parts for spitfires, tanks and munitions to help the Allied forces fight their battle against Hitler.

I followed her story with interest, and those of the other women that emerged after the Sheffield Star began a campaign to recognise this truly incredible generation of women who sacrificed so much to work in the huge, noisy factories for six long years.

After they finally received their thanks from the government and later a larger than life bronze statue was commissioned and erected in the heart of the city centre, I, like anyone else who had followed the campaign, was delighted these women would never be forgotten.

It was a couple of years later, when I read another article about the legacy the female Sheffield steelworkers had left behind, that I started searching to see if a book had been written on them. I was stunned when several Google searches threw nothing up.

To me, it seemed quite unbelievable that, despite what they had endured, there wasn’t a book specifically dedicated to them. So there began my mission to ensure these incredible women gained their rightful place in the history books.

From the very first chat I had with the Kevin Gascoigne, the son of Ruby, who had entered the factories shortly after the Sheffield Blitz, I was left in awe of the stories I heard. Some made me laugh, others left me close to tears but all of them, were fascinating, as they revealed what life was really like, in minute detail during the war years.

I heard stories of sacrifice that left me feeling utterly humbled; mothers who left their tiny babies with relatives, so they could support the war effort, others who lost husbands in the works, due to the none existent health and safety regulations, all of them working in an alien environment that left their ears ringing for hours afterwards.

I heard as many happy stories as I did sad, and what I was left feeling was the upmost respect and admiration for a generation of women, who not only answered their call for duty, but never asked for anything in return. Instead, they carried on with their lives, helping those they loved to find a way of accepting what had happened.

But that does not mean they should be forgotten, if anything their humbling attitude only adds to the reason why this remarkable band of Yorkshire women should be remembered for generations to come. They paved the way for many who walked in their steps afterwards, offering a beacon of inspiration, a steely resilience and fortitude that now more than ever feels incredibly relevant.

It has been a true privilege to write a book on these formidable women, and has also given me the confidence to think about future books.

Tackling racism in the workplace

Here’s to strong women. May we know them, be them and raise them