"Why don’t you go to The Piece Hall?" 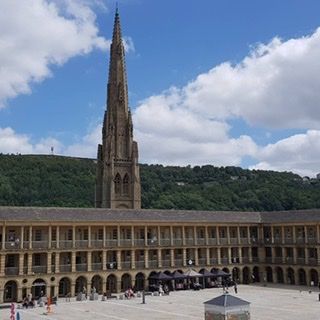 It didn’t do it for me. I didn’t go. I didn’t know what I was missing. I’ve since visited. I do now. I then said I was going to write about it and I was told that there was nothing I could write about it that hadn’t already been written. Gauntlet thrown.

You see, making links and unexpected connections is what makes travel and discoveries fun. As intimated above, I’d been told about The Piece Hall, but it didn’t strike a chord, until that is, I could make a connection with something that was relevant to me. In India I spend a lot of time in off-beat destinations, I also work with and try to promote NGO’s and people who support local artisans still practicing arts and crafts that have largely been lost in the rush towards modernisation. On a visit there last year, I went to Assam and spent quite some time with a lady who specialises in textiles and who is helping to revive natural dyes, creating colours from indigo, tea, turmeric, onion and cow dung! Yes, you read that right. She is also focused on supporting the cottage industry workers who still operate handlooms, often in their front rooms’ and who struggle with distribution channels and suffer at the hands of unscrupulous middlemen. 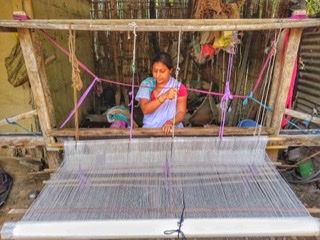 I returned to Yorkshire, saw an article on The Piece Hall, and all of a sudden, something clicked, a connection was made and my interest was finally piqued.

You see, The Piece Hall was built so that the handloom workers in the villages surrounding Halifax, had somewhere to trade the lengths of fabric that they had produced, in their homes. It was, I suppose, the original Amazon or E Bay. Originally, when it opened in 1789, trading was only permitted for 2 hours a week, on a Saturday and if you missed it, then you missed it. Weavers would walk over hill and dale, literally, for miles, carrying heavy bolts of cloth, for the opportunity of renting one of the 315 rooms. Cloth sold here could go on to be sold throughout Europe and even as far as North America.

One wonders what they must have thought, these humble handloom workers who lived in simple cottages in small villages, the first time they clapped eyes on The Piece Hall, because it was and indeed still is, an extraordinary building. Can you imagine in those days, the money that was thrown at this place to have it built? It wasn’t just about trading. It was all about pomp and purpose and it succeeded on all three counts, truly showcasing just how wealthy a region Yorkshire was, on the back of the wool trade. This is something that tends to be forgotten, how our local textiles brought enormous wealth to this region. There are so many anecdotes about this, but a couple that astounded me were that Westgate, in Wakefield, was once described as one of the finest streets outside of London (not sure what part of London mind you!) for its fine houses owned by local business entrepreneurs, and, thanks to the industrial revolution and the machinery which actually put the handloom weavers out of work, Huddersfield had, at one time, the highest number of Rolls Royces per head in the country. West Yorkshire was virtually built on the wool trade, it has even contributed to the dictionary with words like ‘shoddy' and so it should come as no surprise that with so much wealth, the merchants provided such a magnificent building for the cloth to be traded in. It was the Yorkshire merchant equivalent of the Silverback gorilla beating his chest, ‘Look at us, look how magnificent we are!’

Sadly, we have virtually lost all of these wonderful trades and skills in the UK, but The Piece Hall, after once nearly facing demolition, has recently undergone a restoration project, reopening in August 2017 and offering a fun and eclectic mix of shops, art galleries, cafes and restaurants. It is definitely worth taking a detour to visit and one can while away many an hour in retail therapy or with a long and leisurely lunch (post lockdown and tier restrictions) in truly historic, impressive and definitely photogenic surroundings. It is probably only a few people who pause to consider all the wonderful heritage and history that it is built upon, stories of our past, our ancestors and how times have changed. Most people visit to enjoy the shops and perhaps chancing upon some of the homespun yarns, naturally dyed and woven on handlooms products on sale that are produced in India!

For anyone who has an interest in the making of textiles, and handloom weaving and given that is has virtually died out here in the UK, there are some wonderful, niche operators in India who, in normal times, arrange for wonderful trips to visit these artisans. They are: https://thefolktales.com/ and http://www.break-away.in/ both of which have a strong focus on sustainability and rural communities.

Now, originally, this article ended here, had all been signed off and was ready to be sent. I was feeling a little sad that we have lost such skills in this country but, that’s progress allegedly. It was then that a copy of Yorkshire Life landed on my doorstep. I sat down with a cuppa, started flicking through and a short time later, almost squealed with excitement! Had I read it correctly, was the skill of handloom weaving being restarted in Yorkshire? The answer is yes, at Sunny Bank Mills, one of the last remaining family-owned mills in Yorkshire. William Gaunt, the current owner, who incidentally is descended from the Flemish weavers from Ghent who came to the UK in the 12th century, had thought that with the sale of his family textile business in 2008 the families connection with weaving would come to an end. However, when he found some 100 year old discarded looms which he’d been taught on at University, he decided to restore them and with them is bringing weaving back to life by running courses at the mill. To find out more about the courses visit https://www.sunnybankmills.co.uk/