Travel blogger Philippa Kaye shares with us her thoughts and amusing comments on Goa and its connection to the Great Yorkshire Saturday Night Out!

Think of Goa and one thinks of spending a couple of weeks on sun-drenched beaches, lined with palm trees swaying in the breeze, chilled days with chilled drinks and excellent cheap food; in short, the perfect idyll for a well-deserved break. You’d be right. Goa has been popular since it was discovered by the hippies in the 60’s, there’s still a few of those around, the ones who forgot to go home, or maybe realised that living in such an idyll was better than the reality of suburban England. And who can blame them? 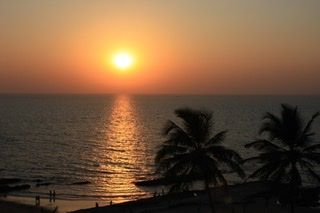 Since then Goa has developed. North Goa caters to the party crowd, flea markets, beach parties and an abundance of budget accommodation (though there are a few wonderful hidden gems). South Goa remained serene, luxury five stars and boutique hideaways, calm and tranquil and an altogether more sophisticated kind of stay. Over recent years Goa has seen other developments too, it was also discovered by the ‘it’ crowd from Delhi and Mumbai which has led to the opening of chic restaurants, beach bars, art galleries, and beach boutiques. It certainly raised it’s game to keep up with this crowd. 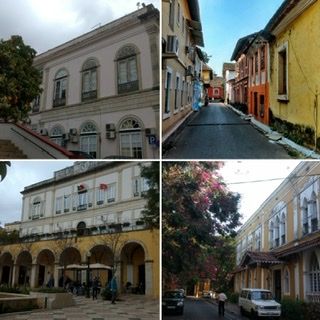 But it is not all about the beaches. There are some wonderful inland nature spots, waterfalls and cycling routes for those who would like to spend some time close to nature as well as occasional days on the beach. It is also a popular place for yoga and various hotels offer yoga retreats as well as small groups being organised by well-known instructors for those who like the more spiritual side of life.

But for those who care to delve deeper into a destination rather than the self, Goa also has a fascinating history. Having been ruled by the Portuguese from the 1500’s until the 1960’s there is a rich catholic heritage, huge basilica’s and wonderful old Portuguese architecture dot the landscape. Fontainhas (or Bairro das Fontainhas, in Portuguese) is the old Latin Quarter in Panjim, Goa’s capital city of the state. It is beautiful, having maintained its Portuguese heritage and ambiance, with narrow and picturesque winding streets just like those found in many European cities, old villas, shaded verandahs and buildings painted in the traditional colours of pale yellow, green, or blue, and roofs made of red coloured tiles. One can easily while away a morning on a guided walking tour of this area. 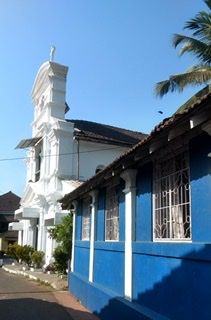 However, there is also a Portuguese influence from Goa that has made its way into the great Yorkshire night out. It was the birthplace of that great old British Saturday night favourite, the vindaloo. I’d often wondered about the vindaloo, I’d lived in India for thirteen years and never come across it. Yet for years, blokes in and around Yorkshire have ended a Saturday after several pints ‘up town’ in Wakefield (as just one example) with a vindaloo yes, the hottest ‘Indian’ curry imaginable. That false machismo that several pints give Yorkshire men to compete to eat the vindaloo, ‘Ey, I’ll have an Indian, and make it a vindaloo, ‘ottest one possible.’ But do you know what? It isn’t even Indian. No, the vindaloo arrived in India, Goa to be precise, along with the Portuguese back in the 1500’s.

The current name is thought to be derived from Carne de Vinha d’Alhos, a dish prepared by marinating meat (usually pork) and then cooking it in wine vinegar and garlic. Now given the difficulty of getting such ingredients as wine vinegar in Goa even today, the wine vinegar soon gave way to local palm vinegar made from coconut toddy, an ingredient that was more than readily available, given the abundance of palm trees around. Then other flavours were added, pepper, cloves, tamarind, cardamom and yes, that legacy of the once great Portuguese Empire, also imported into India, chilli peppers. However, as with most dishes in India, the point when amalgamating the different spices is not to generate heat. It is not to make something so painfully hot that the only respite is to stick ones head in the fridge or suck on vast quantities of ice and wait in fear for the recriminations which are bound to occur, ‘down the other end,’ the following morning. No, the point of spices in India is to generate flavours, unique, delicious, sometimes subtle, sometimes not so subtle but flavours non the less, to be savoured.

And so, as the pubs are only just beginning to open, and as travel to India will be closed for some months yet, and as Portugal remains somewhat controversially on the list of countries still to be wary of, I thought that this week I would bring you something that amalgamates them all without having to leave home, the traditional Goan Portuguese recipe for Pork Vindaloo.

Combine the chillies, cumin, turmeric, 1 piece of cinnamon, 5 peppercorns, 4 cloves, and sugar in a grinder. Grind until a fine powder is formed. Transfer spice mixture to food processor or mortar and pestle and add garlic, ginger, and vinegar. Process or pound until a fine paste is formed. Scrape out paste into a small bowl and set aside without washing out the food processor.
Place the pork in a large bowl and season with salt. Add half of spice paste coat the cubes of pork. Add the onion to the food processor and process until a paste is formed.
Heat the oil in a heavy-bottomed saucepan over medium heat until shimmering. Add the onion paste, remaining 4 peppercorns, remaining cinnamon stick, and remaining 3 cloves. Cook, stirring constantly, until the onion is soft and the oil is fragrant, about 5 minutes. Add the remaining spice paste and cook, stirring occasionally, until the oil separates and the mixture starts to sizzle, about 5 minutes longer.
Add the pork and cook, stirring occasionally, until browned, about 10 minutes. Add water to the food processor bowl and swirl to rinse. Pour this mixture into the pan and bring to a simmer, stirring occasionally. Reduce heat to maintain a gentle simmer, cover, and cook until the pork is fork tender, about 1 hour. Serve immediately with naan bread or rice, or for a better flavour, cool, store overnight in a sealed container in the refrigerator, and reheat before serving the next day.

NB: The pork can be substituted with any other meat.

Whilst no Indian household would be without a spice grinder, they are not so common here, I find a food processor or smashing with a rolling pin works reasonably well. 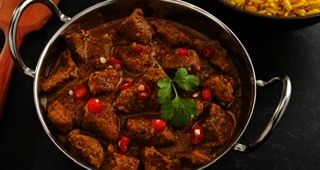 Philippa is the author of Escape to India available on Amazon and blogs at:
memsahibindia.com

When are soft – or key – skills more vital than technical attributes?