Yorkshire family given the Barnsley Chop

It has been 30 years since Yorkshire Shepherdess and busy mum of nine Amanda Owen has visited a hairdresser. Her long hair had almost reached her waist and although it was in good condition, Amanda wanted to have not just a change, but something that would be stylish whilst being practical and easy to manage, suiting her busy lifestyle.

Apart from working on her remote Dales farm, Amanda is a published author attending many book signings and events, as well as starring in her own TV series for Channel 5, Our Yorkshire Farm, currently the channel’s highest rating show.

When Amanda told Yorkshire Businesswoman and TopicUK editor Gill Laidler about her hair, and the fact that she had last visited a salon in Huddersfield 30 years ago, Gill contacted the wonderful celebrity hairstylist and Yorkshireman Andrew Barton to ask if he could help.

“Andrew has been working with Yorkshire Businesswoman since we launched earlier this year, providing valuable styling tips for our readers,” explained Gill. “When we told him that Amanda had not been to a professional stylist for more than 30 years, he was only too happy to step in and offer his services, especially as he saw an opportunity to ask Amanda if she would donate her cropped hair to the Little Princess Charity, where Andrew, through his salon Headmasters, is hairdresser ambassador and official partner of the charity.

So Gill and colleague Mandy Taylor, met up with Andrew and his PR specialist Sharon Brigden from SLBPR, professional photographers Roth Read, and ITV Calendar and headed out to Ravenseat Farm.

Raven, Amanda’s eldest greeted us with mugs of steaming hot tea whilst the barn, with it’s beautiful Dales backdrop, was transformed into a salon for the day, enabing everyone to social distance safely, a little different to Andrew’s usual elegant Mayfair surroundings, as we were watched over by sheep, chickens and a proud peacock who had just become a mum!

Getting Amanda to sit down was a challenge in itself, with excited children buzzing around, this busy mum rarely finds time for herself.

After describing her lifestyle to Andrew, it was decided that a stylish ‘choppy bob’ would work best and Andrew quickly got to work to remove long lengths of Amanda’s hair, careful that those precious cut locks were placed on one side for the charity. 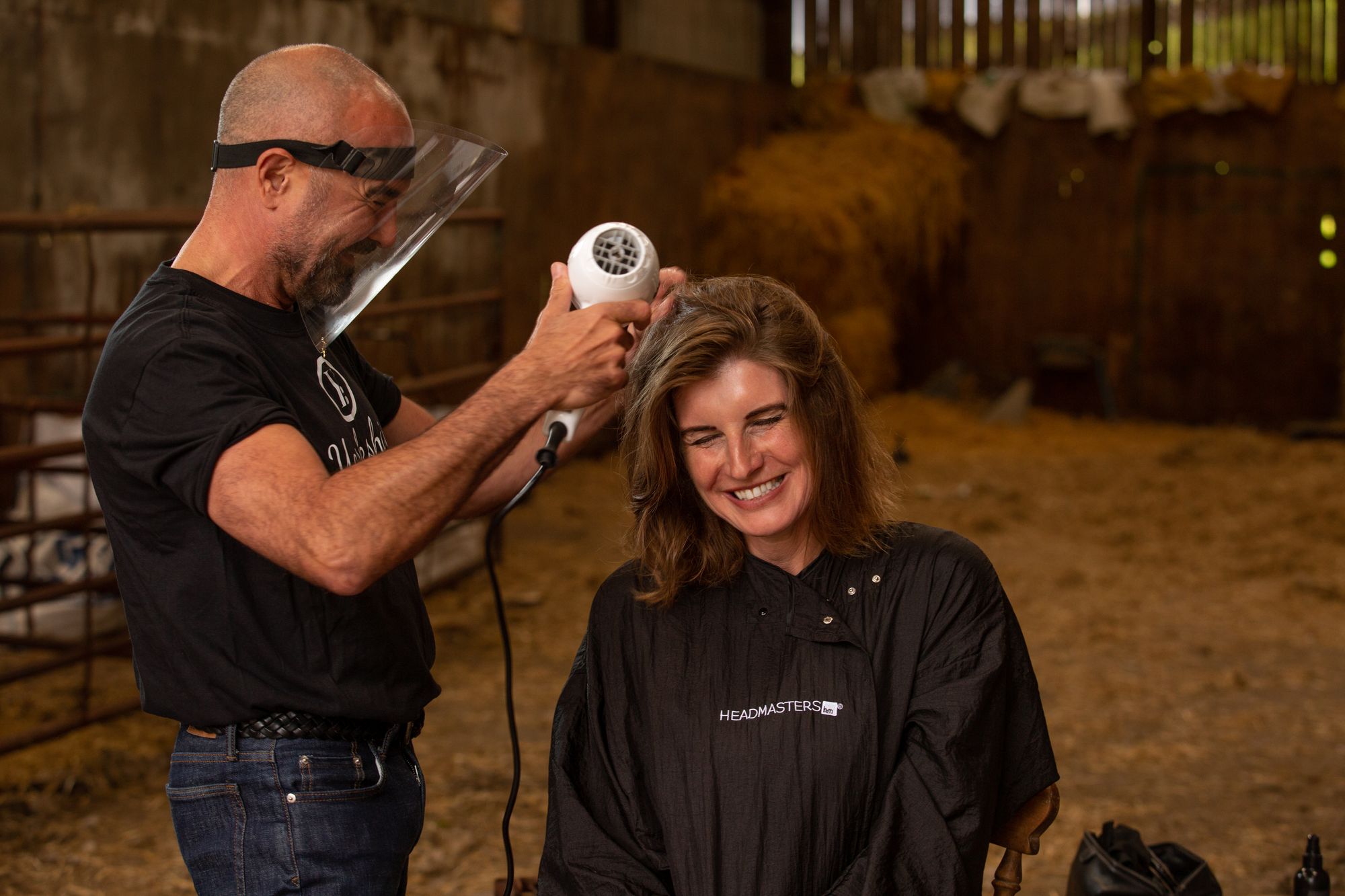 The Little Princess Trust gives Hair and Hope to children and young people by providing them with real hair wigs and funding vital research into childhood cancers.

The charity was set up in 2006 in memory of Hannah Tarplee. When she was diagnosed with a Wilms Tumour in 2004, the loss of Hannah’s hair was especially traumatic. Her parents struggled to find a suitable wig for her during treatment duue to little in the way of NHS provision and felt the most fitting tribuute to the five-year-old would be a charity dedicated to providing wigs to children who had lost their own hair due to cancer treatment and other conditions.

“The smiles put on the faces of young children is lovely to see,” said Andrew. “It can take up to 12 individual hair donations to make one wig, while it costs £550 to provide a young person with a wig so free donations of hair is widely welcomed.”

So imagine Andrew’s delight when he turned to see five of Amanda’s children nicely lined up waiting to donate their own long hair for this amazing charity. “I was quite overwhelmed,” he said, “that these young children wanted to help others less fortunate, I knew it was going to be a busy day!” 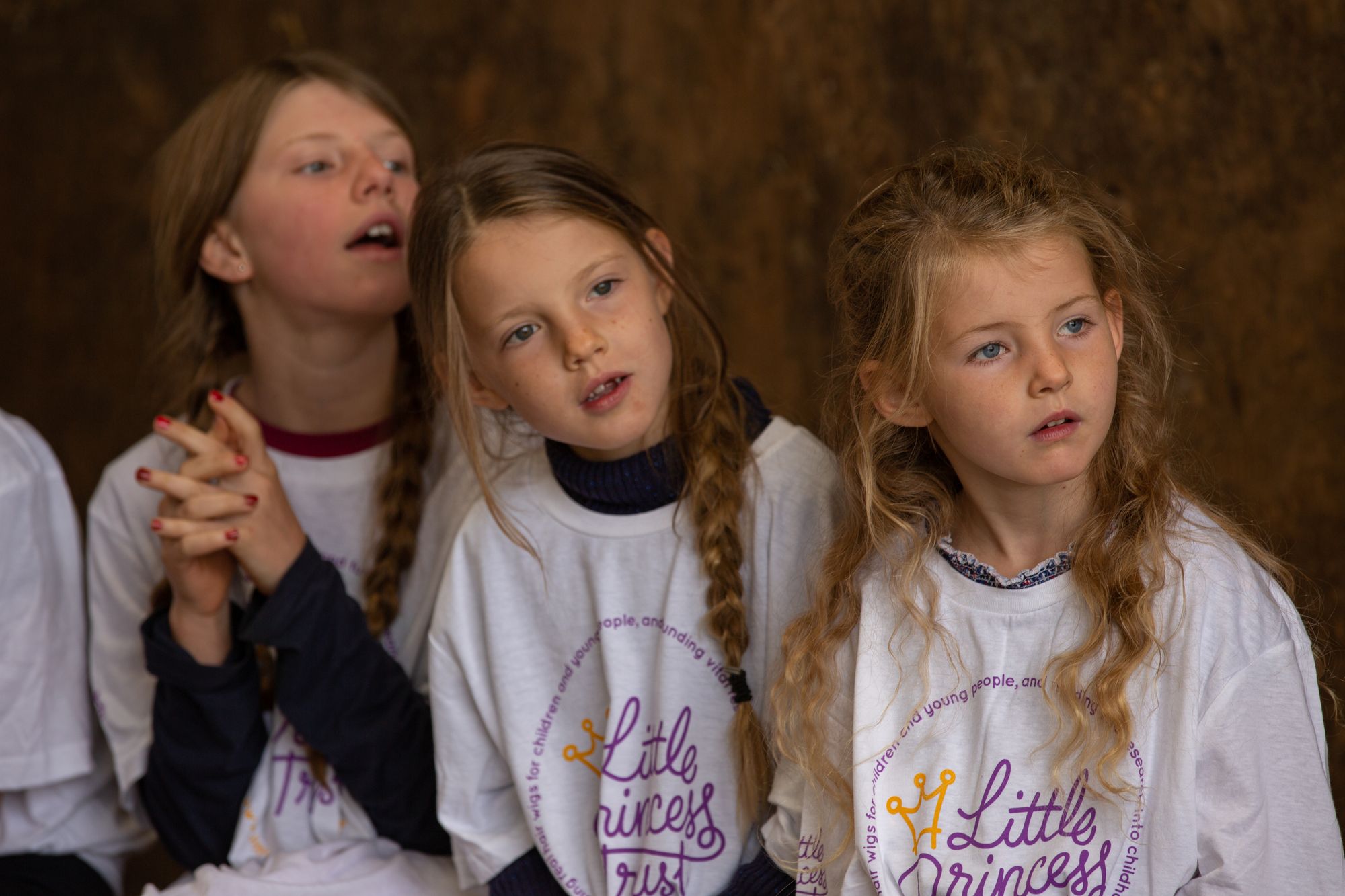 Busy day was an understatement, little did Andrew know that we had set up another challenge for him, the opportunity to shear a couple of Amanda’s sheep who had been watching proceedings with interest from a nearby pen.

With all hair cut Amanda’s husband Clive and two sons joining us, not to have their hair cut, Raven had already done the honours there, it was the turn of the sheep!

Clive expertly grabbed the first ewe and set about giving Andrew his first lesson on sheep shearing. Tentatively taking the clippers from Clive, Andrew’s hair cutting skills entered a new level! “Clive made it look easy, but it was incredibly difficult and of course I was worried that I would hurt the animal, although I was assured I wouldn’t,” he said. 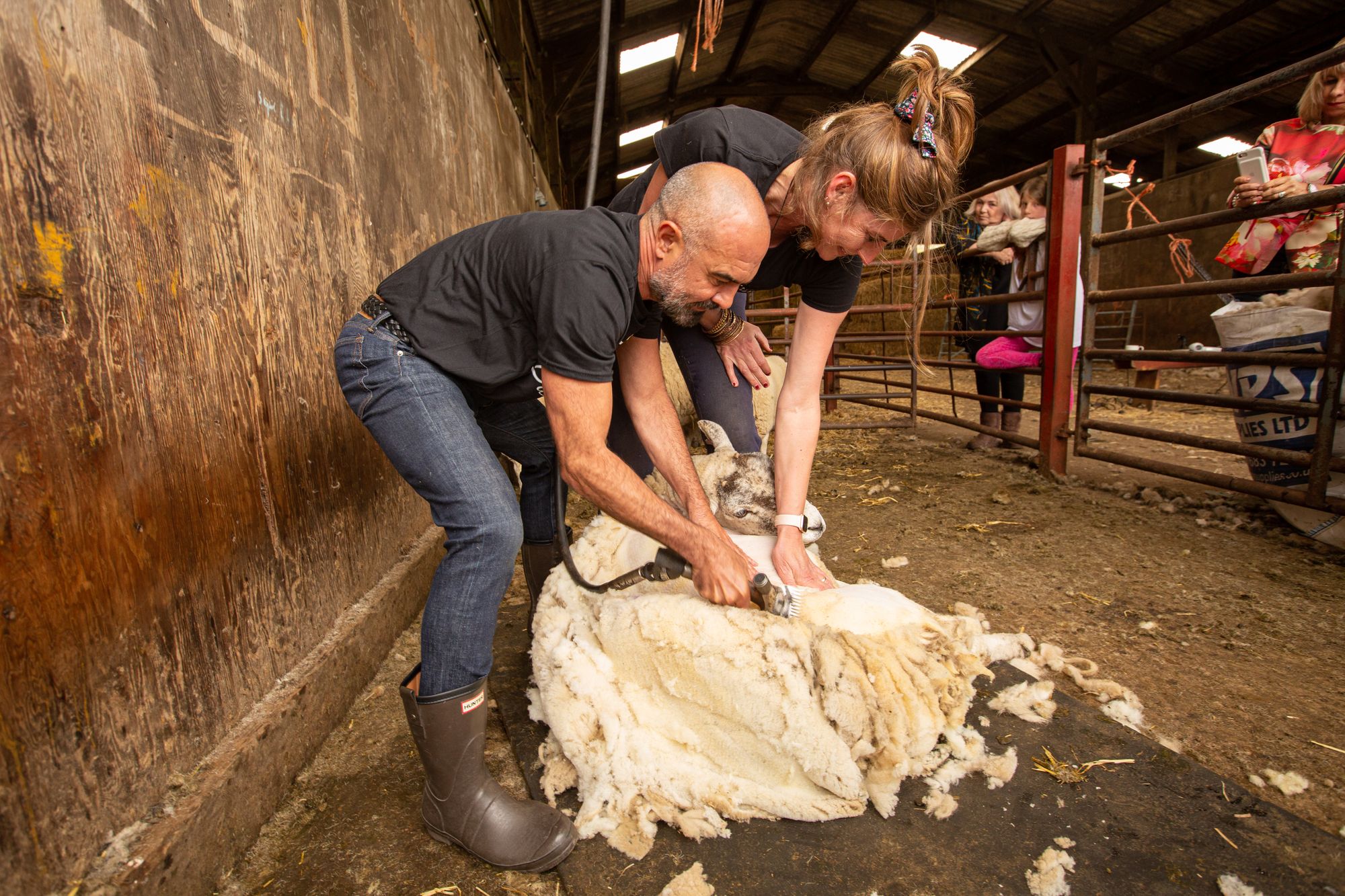 The second ewe was pulled into the pen, this time it was Amanda who picked up the shears and began clipping effortlessly. Keen to continue, Andrew soon had the clippers back in his hand and was guided by Amanda. The result, two beautifully clipped sheep and one exhausted hairdresser.

“I am so thrilled with my new haircut,” said Amanda, “it will be so easy for me to manage, I wish I had taken the plunge and had it cut years ago, it feels amazing. It is a nightmare each morning getting the girls to brush their long hair, so their new shorter styles not only make them look cute, their hair will be much more mangeable and less of a drama for me tryimg to get the knots out! The bonus is of course that the childrens charity will receive lots of hair for their wigs.”

“It was lovely to spend time with the family,” added Andrew, I always enjoy coming back to Yorkshire so I have asked Yorkshire Businesswoman and TopicUK to set up another challenge for me!”

**Do you fancy having your hair cut by Andrew? **

Do you know of an unusual location in Yorkshire where Andrew could visit and cut your hair? To be in with a chance of winning a new hairstyle makeover by Andrew, all you have to do is send us a photograph of yourself and tell us which unusual location we could visit to style your hair. Please note: you must have permission from the owner of the location if it doesn’t belong to you. If you are the lucky winner, a date will be then arranged between our winner, Andrew and of course the owner of the location.

It could be a beach hut in Whitby or a Stately home, or what about an unusual workplace? We’ll leave that up to you. Send your entry to hello@yorkshirebusinesswoman.co.uk by Friday 28th August. Andrew will select the winner with the most unusual location. Good luck!

The editors decision is final. There is no cash alternative prize and the winner must arrange the location with the owner if not their own and travel to and from said location independently. Images will be taken of the winner, before and after styling and will be used in TopicUK and Yorkshire Businesswoman.

For anyone who wishes to book an apointment with Andrew at his Mayfair Salon, call: 0345 459 7719 or visit the website: headmasters.com