Finally, I am the mistress of my own destiny 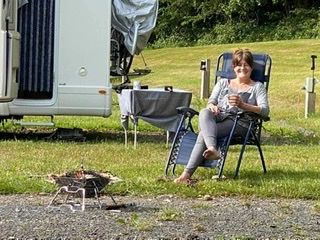 I started my working life as a nurse at St James’s hospital in Leeds in 1977 and I worked as a State registered nurse for nine years before having my daughter Samantha and joining the BBC, on their trainee reporter scheme at the age of thirty.

For the next 30 years I was a Presenter, Reporter and Producer for both Radio and Television, including at Look North in Leeds and Radio's Leeds, Sheffield and Humberside, before moving to work in television in Kent.

During that time I became increasingly disillusioned with the way ageing people were depicted in the Media, Advertising and Marketing. I felt the older I got the more people started to treat me differently at work, often overlooking my views and and ideas in the newsroom, thinking of me as a second-class member of the team. ‘I may have been sixty but I’m an intelligent ,articulate woman ‘ I would think to myself and my views deserved to be heard.

I vowed that I would do all I could to change the images used to depict older people and do my best to help change the narratives surrounding ageing so that it is not seen as something negative to get old, but rather something to be positive about. At the same time I felt that we as a society, were spending far too much time working to earn money to buy stuff we did not really need, or could not really afford, but because we were working such long hours we had hardly any time to spend with family and friends. It all seemed so crazy to me.

With all this in mind I decided that I would get rid of my flat and most of my possessions and buy a motorhome and travel around Great Britain to try and dispel the stereotypes of what retired pensioners did and what they looked like.
People at work thought it was a joke at first until they realised that I was deadly serious. Many saying ”you are actually going to do this aren’t you?”

A few years ago I gave a talk at a women’s conference called AGELESS FEARLESS WOMEN,YOU CAN DO IT TOO. I outlined my life really from being a nurse to having my daughter. Finding myself as a single mother when she was four. Getting onto the BBC Trainee reporter scheme and becoming a journalist in Radio and TV for 30 years. Taking a gap year from the BBC just before I turned fifty , packing a rucksack and travelling around the world on my own to seek out adventure.

Then running two marathons, climbing the three Yorkshire Peaks and climbing Mount Mulanje in Malawi with an amazing group of entrepreneurial women who I travelled over there with to help women in Malawi with their start up businesses and community projects.
I even went to Glastonbury with some other 50 somethings and we called ourselves THE MENOPAUSAL MERMAIDS and we had such a blast.
At the end of my talk I said my next big adventure, when I retired, was to sell up and travel Great Britain in a motorhome. I planned to put myself where I wanted to be, not where society seems to think retired pensioners should be. And I still cannot believe I am actually doing it now.

I bought my motorhome and named her “Dora the Explora“, she had everything I need, shower, toilet, cooker, microwave, fridge freezer and heating.

I started my blog and set off into the Yorkshire Dales and the Lake District. I spent the first week with two friends I had met when I was nursing. The Long overdue girls trip eased me in nicely.
I then headed up to Scotland in the winter months so that I could have time for reflection away from crowds of people.

I parked up on the edge of Loch Morlich, near Avimore, it was so tranquil, calm and beautiful.

Another reason for doing this journey was for me to take a good look at my life and to reflect on who I am and what I really want to get out of my life during my retirement years.

During the last few years my belief in myself had been shaken, during the menopause and by how I was treated by my boss at work. I cannot believe I ever allowed myself to be treated the way I was. But when you are going through the menopause it is so hard to fight back. If I ever see that person again in my life I will give him both barrels and tell him what he did to me and how he made me feel and I never deserved that. The sad thing is he has daughters himself and I wonder how he would feel if a man treated his daughters the same way in the workplace when all they want to do is a good job at work.

I feel strongly that a lot more needs to be done to raise awareness of ageism in the workplace and in society in general. I also want to dispel stereotypes of what retired pensioners look like or what they are doing.

I know I am lucky that I am being totally selfish and doing what I want to do when I want to do it. That is so liberating for me after so many years of being told pretty much in my working environment what I had to do and when and how I had to do it, by a lot of people I did not respect because they were so mean spirited. Now I live a simple life and I really appreciate the smallest things and realise the healing power of nature.

Too many people lose themselves and their sense of identity and purpose in life when they retire and I want to do the opposite and really find out who I am and what really makes me tick.

It was a scary prospect heading out alone. I have done a lot of soul searching and taken a lot of inspiration from things I have been reading and like minded people I have connected with on social media. I felt I was beginning to get more of a sense of who I was. But the recent breakup of my relationship set me back a bit, I felt a bit rudderless and not as focused for a bit but I can feel my resolve coming back to enjoy this adventure and go out and meet people and to experience new things. And to achieve a deep sense of purpose to help others going through the menopause who lose their way and who are facing retirement and life's changes. For me retirement is definitely an exciting phase of my life and I feel as if my life is moving forward and I am changing, I cannot wait to see what is in store for me.

Since I set off I have been all over England and Scotland. I have weathered several storms and high winds, experienced the worst rainfall in February, since they began recording rainfall levels and a Pandemic with Covid 19.
I was fortunate to be on a site in Lancashire when lockdown happened in Great Britain and the owner let me stay there for nearly five months.

I somehow managed to survive lockdown in the motorhome without going totally stir crazy. It was definitely an emotional rollercoaster. Sometimes feeling totally lost and other times embracing the fact that I had all the time in the world to do what I felt like doing. I cycled for miles on my EBike, the battery was a god send when there were big hills.
I embraced the world of social media ,which was a source of support and knowledge. I connected with so many inspiring people who have reaffirmed my desire to challenge ageism and to change the way people feel about getting old.

During lockdown I became particularly concerned when there were suggestions that anyone over sixty should stay indoors for their own protection. I was incensed, I understand that it is vital that people who need support get it but those who don't should not be made to adhere to government commands because they have reached a certain age. No doubt in the future I will be grateful for extra support in situations like this as my health and body become less robust. But for now I am able to climb mountains, cycle and walk for miles and I would say I am fit for a sixty one year old. Ok I have a bit of a dodgy knee that gives me gip but that does not mean that I should be herded into the vulnerable category. It is not one size fits all.

I want people to look at the whole issue of ageism, because it does not just effect elderly, Ageism means that you are discriminated against because of your age. So younger people can come up against it too. It is something we should all be aware of and address it when we see it happening.
Older people are widely patronised and mocked in society and many are seen as incompetent. This needs to be addressed particularly in work places. The government is forcing us to work longer and wait longer to get our pensions but at the same time attitudes in the workplace are not changing quickly enough. My last few years in my job I had to fight hard to get my voice heard. Older workers are often seen by unfair bosses as having lower levels of performance and less ability and they are often forced out by unreasonable behaviour. They become so stressed they cannot fight the ageism anymore. There needs to be more awareness in society and even more legislation, to prevent this from happening.

I have listened to talks and read a lot about ageism during lockdown and the ways we can try to combat it, especially post Cover-19, because I feel many of the decisions involving older people in care homes during lockdown was ageist. Decisions were made purely on age rather than on need and vulnerability.

I feel so much more empowered and confident in the decisions that I’m making now, and I want other women to experience those feelings too. I feel truly authentically myself for the first time and I feel ageless and I am mistress of my own destiny. I want to use my voice wherever possible to try and help change perceptions about being elderly and how we grow old. I want to continue my motorhome travels as a retired pensioner for as long as I can and write about it. I want to shout from the tree tops that life is for living and we can do that at any age. And ageing is a privilege that we should embrace and make the most of without restriction.

Put yourself where you want to be in life, not where society says that you should be because you have reached a certain number of years on this planet.

We’re all in this together

A classic car for every budget