You are what you eat

When our resident Chef Tim Bilton told us he was writing a story about how to "Pick a Proper Bird" our ears instantly pricked up!

Okay who had chicken this week?

Most of us will have tucked into chicken in some form or another, as it seems, as we have become a nation of chicken eaters. Just the sight of the queues down the road for fast food out-lets breaking my heart.

With the rise of the humble chicken in the last 50 years it accounts for half of fresh meat sales in our supermarkets.
Then as Brexit takes a back seat the US is moving in with their trade deals. The one that stands out to me is CHICKEN. 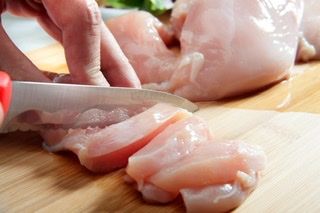 Chlorinated chicken: How safe is it?

At present there are a million rules in this country about how animals should be reared and how they should be transported, satellite tracking, animal passports, many other forms and regular inspections.

Unfortunately, post-EU trade deals mean supermarkets can import chickens from countries where the birds are not so lovingly cared for let alone dipped in chorine.

I’ve just finished watching ‘Breaking Bad’ yes I know I’m late to the table but Gus Fring the drug lord and chicken man with his fourteen fast food Los Pollos Hermanos, had a better understanding of chicken welfare. He was selling blue meth but that maybe better than dipping his chickens in bleach before deep-frying them.

Or the unscrupulous Hilary Briss from the League of Gentlemen - the butcher and proprietor of Hilary Briss and Son, Royston Vasey's local butchers. His wares include a secret "special stuff"; a mysterious and highly addictive foodstuff, which, it is implied, is both illegal and hideously immoral. Mmmmmmm is this the way we are going?

I really can not get my head around consumers in the UK eating this type of chicken with its smell of bleach and chlorine (you know the type when you went swimming with school to the local baths and the smell hit you) and no matter how hard you washed your self you could smell that smell for days later on your skin.

This is only one of the disinfectants that are used in US processing plants, lactic acid being another popular choice.
After the chicken is slaughtered, plucked and prepared for sale it is sprayed, rinsed or dunked in antimicrobial agents, known as pathogen reduction treatment. (sounds like Walter White aka ‘Heisenburg’ has something to do with this from ‘Breaking Bad’ there are that many chemicals that go into it).
Its illegal in the EU and (for now) the UK.
But some consumers go on price alone and with this method of fast produced chickens the US can farm chickens for fraction of the cost of British chickens.

Does the idea of chowing down on chicken that’s been blasted with chlorine dioxide sound appetising? Americans have been served up chlorine-washed poultry for decades and as we flap ourselves out of lockdown, chlorinated US chicken may well end up on British plates in the near future.

We are tying ourselves in knots about chlorine, but that isn’t really the issue. The problem is that chlorine is part a processing method that makes up for poorer welfare standards on poultry farms that have sacrificed hygiene for increased production. And so chicken is washed with chlorine and other chemicals to kill off harmful microorganisms, such as salmonella, that may be present on carcasses. But this could as it turns out just be a sticking plaster on bigger issues, such as hygiene, over crowding and low welfare standards on farms and in slaughterhouses. The problem could be much worse in the future,

The US has made it abundantly clear that if the UK wants to do a trade deal with them we will have to lower our food standards. That would mean UK consumers being forced to accept things like hormone beef, pesticides currently banned in the UK, the removal of E number additive labelling and overuse of farm antibiotics.

But the EU believes that relying on a chlorine rinse at the end of the meat production process could be a way of compensating for poor hygiene standards - such as dirty or crowded abattoirs.
Instead, the EU says the best way to eliminate the risk of salmonella and other bacteria is to maintain high farming and production standards.
The European Commission says: "This rule is part of wider EU legislation ensuring a high level of safety throughout the food chain, from farm to fork."

For example, in the UK the maximum amount of time live birds can be transported for is 12 hours. In the US, it’s 28 hours. Cramped, hot, and maltreated, the chickens become susceptible to infection.

What are the animal welfare issues with meat chicken farming?

Chickens that are grown for meat production (also called broiler chickens in the industry) are genetically very different from layer hens (which are bred to produce eggs). Meat chickens have been selectively bred over many generations to grow and gain weight very rapidly, with birds ready for processing at 4-6 weeks old. A younger meat chicken, is processed at 21 days of age.

According to the British Poultry Council, more than 95% of broiler chickens are indoor reared and when the chickens get to maximum weight of 4.5kg the amount of room that they have is the size of two A4 sheets of paper per bird and even less for smaller birds.
Standard birds have no guaranteed access to the outside, while free-range birds must have access for half their lives and organic for a third of their lives. But the best farmers do far far better than the legal requirement.

Broiler sheds are generally bare except for water and food, with no natural light. There is litter on the floor to absorb droppings, which typically is not cleaned until the chickens are gathered for slaughter. Contact with litter can cause painful burns on the birds’ legs (called hock burns) and feet.
The air can become highly polluted with ammonia from the droppings. This can damage the chickens’ eyes and respiratory systems.
Chickens confined in these barren sheds are not able to adjust within their environment to avoid heat, cold, or other birds as they would do in natural conditions.
It can get very hot inside the sheds, especially in warmer months. If the ventilation systems fail, thousands of birds can die within hours.
Stocking density is a welfare issue, especially at the end of the growing period. Chickens may experience a lack of exercise due to their large body sizes, low lighting levels, lack of a stimulating environment, and lack of space, which increases the incidence of lameness.
Approximately 70% of chickens raised for meat globally are raised in intensive farming systems. This includes the majority of chickens in the US, UK, and Europe, as well as rapidly increasing numbers in developing countries.

Their poultry is traditionally farmed, hand-fed and kept in small flocks so that they are truly free to forage for food and roam their Yorkshire pasture.
Their birds have something else rather special about them – their unique diet which includes over 10 varieties of fresh herbs.
On top of their natural cereal based feed, free from additives and growth promoters, they have adapted our bird’s diet to introduce fresh herbs. The herbs are a by-product produced locally, by Edwards Aunt’s Alison herb company – Herbs Unlimited, a company I have used for my herbs for many a year now.
They are proud to be the only producers in the country feeding our poultry on this diet. By maintaining the highest possible animal welfare standards and enhancing their diet with fresh herbs, our birds have a flavour that is difficult to beat.

Paul also rears loose geese and loose turkeys at Christmas.
He sells his chickens to a wholesaler and his loose birds are available at prices between £7 and £15 online.

My good friend Andrew Pern of the Star Inn at Harome has long been a champion of Loose birds. Increasingly quality and taste in chickens is what top restaurants and quality butchers and farm shops are looking for.

Today the poulet de Bresse has the reputation of being the best quality table chicken in the world. The chef Georges Blanc, who is from Bourg-en-Bresse, has been president of the Comité Interprofessionnel de la Volaille de Bresse, the association that oversees the product, since 1986.
The price of this is quite eye watering (and that’s not the chlorine) at about £37 per kilo.

I remember as a young chef working for Raymond Blanc at Le Manoir and serving Poularde de Bresse en vessie. A prepared chicken is stuffed with foie gras, truffles, and other flavourings, then enclosed in the bladder and poached in chicken broth.
En vessie refers to a cooking method in which meat or other dish is cooked in a (pigs) bladder.

There is so much more that I could delve into with regards to our chickens. Believe me if you knew what your cheap chicken goes through you would never buy let alone eat a cheap chicken ever again. Remember the next time you buy a chicken for your Sunday or midweek dinner, choose the very best that you can.

As the saying goes "you are what you eat".

Retailer donates thousands of items to help people in crisis